I've been living with Celiac Disease for over a decade. A lot has changed since  my diagnosis 2003. I've learned so much along the way, in small bits and pieces, and continue to learn more every day. I'm an educator by training, so maybe that's why I'm a Celiac Disease advocate. If I've learned something that can help someone else, I feel like it's my obligation to share. 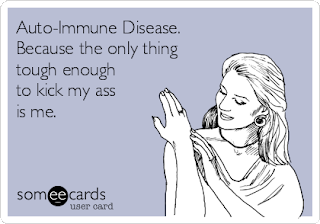 What is Celiac Disease?

So how does one get tested for this autoimmune disease? The two B's - blood work and biopsy. And for these tests to be accurate you have to "B" eating gluten. (See what I did there? I'm so punny.) Doctors traditionally order a Celiac Disease panel that screens for the tTg, EMA, and DGP antibodies. If those come back with a high level of antibodies, the next step is a small bowel biopsy done via endoscopy Before you panic, an endoscopy is performed by passing a tube through the throat, so there's no need to drink the "junk" prior to this procedure. People sometimes comment that it's highly invasive. Sure, there are some tissue samples, but more cutting and anesthesia is given when someone has their wisdom teeth out. It's really not that bad. At least in my opinion.

Genetic testing can be done, but since as previously mentioned that having the genes doesn't mean you will develop the disease, the genetic test can only be used to RULE OUT that you don't have it.

If I could pass on anything personal about the disease, it would be this - It's not anyone's "fault." If you're a parent, you didn't "do" this to your child. If you're a child, you're parent didn't "make" you this way. We all carry around enough guilt and shame in this life. Don't let this be one of them.

How Does Celiac Disease Affect the Body?

As I mentioned above, the antibodies created by ingesting gluten destroy the body. Specifically, the antibodies destroy the villi that line the intestinal wall. Villi (vill- eye) are small finger-like projections that line the wall of the bowel. They're little nutritional vacuums, sucking up all the vitamins and minerals from the food we eat. They absorb the calcium we need for strong bones, the iron we need for red blood cell production, the B6 vitamins we need for metabolism, and the list goes on. Without those little guys, we're just as malnourished as a child living in a third world African country. Our body systems can't function properly without those nutrients, which is why Celiac Disease has so many symptoms and is often misdiagnosed.

Some of these issues can be embarrassing. Before I was diagnosed, I had the most foul smelling gas. Some of the symptoms can be painful. I was plagued with joint pain all throughout college. Some of the symptoms can be highly dangerous. There are many times that I had racing heart rates, which made me anxious that I was having a heart attack. The University of Chicago's Celiac Disease Center has a complete list of the 200+ known associated symptoms. After diagnosis, I looked at this list and realized so many of my random health issues throughout life were on that list.

Among these symptoms are also neurological and mental health issues. I think this is important to include, as anxiety and depression is on the rise in this country. While these are very real diseases which often require medical intervention, it's worth mentioning that the food we eat can play a large part in the way we feel emotionally. There are those with Celiac Disease who may never have physical symptoms from ingesting gluten, but have very serious panic attacks. I personally had one every morning for a year prior to my diagnosis. It's definitely not fun. I also share this for those who may think that "a little" gluten won't hurt someone with Celiac Disease. Please don't mess with our food, because it can literally mess with our minds.

In the next few weeks I'll touch on the social implications of Celiac Disease, as well as how to navigate the diet at home and away. I'll also be working on a list of resources, including how to find a knowledgeable doctor. In the meantime, I'd love to read your comments about what questions and tips you have. This series is a work in progress, and I hope to unite our community for the improvement of us all.

- The gluten free diet; what's safe unsafe, and by whose standards

- Eating outside of the home and other resources

Why do people get celiac disease?

A declaration of gluten independence

Celiac Disease Wasn't a Part of the College Plan