Tumbling Gluten Free
For how you eat For Your Health

The recent dust-up regarding Pope Francis's remarks (and decision) regarding the use of so-called gluten-free hosts has rather a crowd of celiac and non-celiac alike up-in-arms. Some -- affronted. Others -- non-plussed. In between, most people seemed at the very least miffed that the pontiff has re-iterated the Catholic Church's always-stance that the Eucharist (and its substance, the communion bread) must be made from -- wheat.

Perhaps the miffery is high because of the use in some parishes of actually gluten-free hosts.

Celiacs could receive them. 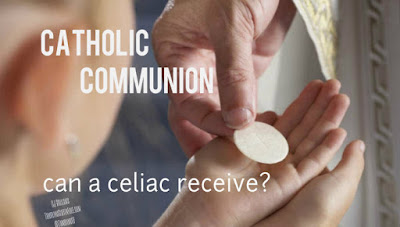 So what would I think if I couldn't receive the Body and Blood of Christ, the "source and summit" of my faith (as the Catechism states)?

We Catholics do not simply see the act of reception as a communion with the greater Church; as fellowship; as tradition. This is literally God's flesh, and God said to take, and eat, if one wanted to live and be in relationship with Him.

So a bit of conundrum.

Why am I not in the midst of the miffery, then?

Because this is nothing new. Gluten-free bread has never been sanctioned for the celebration of the Lord's Supper, and the Eucharist. Low-gluten hosts have been permitted, providing that they "contain a sufficient amount of gluten to obtain the confection of bread without the addition of foreign materials and without the use of procedures that would alter the nature of bread.” (Letter from Pontiff Emeritus, Benedict XVI)

As many physicians agree that 20ppm, or less, of gluten ingested by most celiacs will not be enough to set off the t-cells (and that glut-bloodying autoimmune insanity), some celiacs can -- and do -- receive the host and the cup. Wine, of course, is gluten-free.

Others do not, and should not, if their specialist has recommended they  avoid the risk entirely. I'm one who avoids the parts-per-million entirely, due to high gluten-reactivity/sensitivity.

So what is the miffery? It's mostly media. 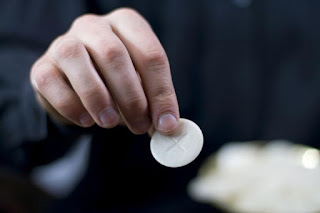 Gluten-free hosts never have been.

But this --regardless of one's opinion about bread and valid communion-- does not exclude me or another Catholic Celiac from full communion, or full Communion. As understood and taught by the Church, and her people, from the beginning and the first Last Supper (definitely not celiac-friendly), Christ is fully present under the form either of bread or wine.

When I receive the chalice, I receive exactly what anyone else in the congregation who receives the bread receives.

It may look different, on the outside. But that's not strange -- that's Celiac-old-news. I often look different from the outside, in what I need to do or eat. It doesn't change that I'm eating, or participating in the act of receiving nourishment.

A disease has changed us, but low-gluten hosts, and the two-forms of Communion have kept us just as close as ever to our traditions, our community, and our God.


Got more questions?  Shoot them my way.

A Decade Since Diagnosis: 10 Years, 10 Lessons

Welcome to the site for custom eaters!