Tumbling Gluten Free
Reviews For how you eat Promotional
I got to go to Expo West this year! the natural foods trade-show that swamps Anaheim each Spring with gluten-free new goods. Wicked w00t to that, because I love to travel -- and it's been 3 years I've missed out due to rotten celiac health. This year, I want to showcase those companies -- and products -- that are truly gluten-free, and thus, celiac safe. 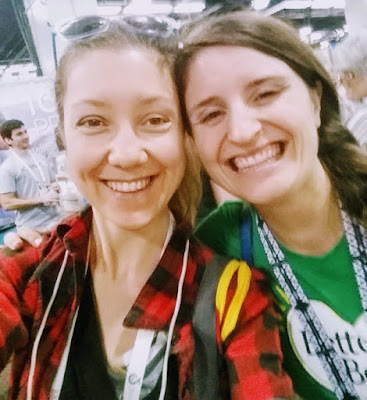 I suppose I go to ExpoWest as a writer and nutritionist. But I went this year as a social advocate too. Out attitude to food,  Freedible founder, Cheryl Viirand has remarked, shapes culture. So does business; and those companies that put service & human dignity at the core of their mission, support celiacs & others living with food restrictions, and change the attitude of society. Of course, when it comes to food personally, I can't go anywhere where I'm not also celiac. It may not be my core identity. But it is a core piece of my life, and when I walk onto a floor full of food, it means I ask a lot of questions.So read on: When these companies say gluten-free, they're not taking the mickey out of you, because they are 1) purity-tested, 2) certified, and 3) personally and accountably well under 20ppm. (Just ask Zego. Or better yet, snap the QR code on each product to get an in depth testing report for that batch).


:: Sports "GF" alongside other certifications: Is it diet fad, or celiac-serious? ::


Canyon Bakehouse is celiac serious.  Seriously good. I love this bread. Now, it's not just soft, holding together toasted or untoasted, it's sersously sandwich size too. (This means double-hand long and large enough to lose your stuffing in.) 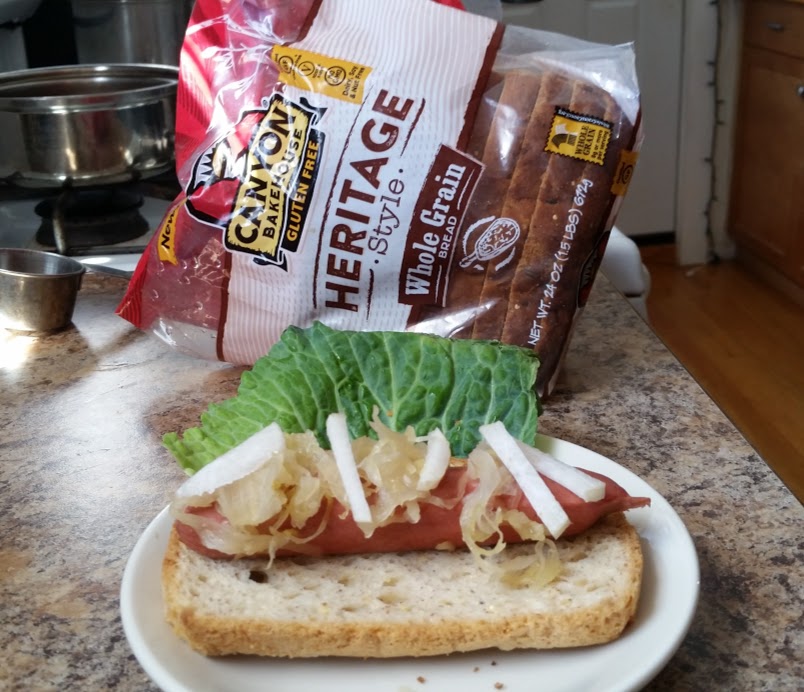 .Gluten-free, to the point that each batch is tested to be under 5ppm, the bread is also soy-free, and non-gmo. It lacks gluten, indeed -- but it doesn't lack much else. http://canyonglutenfree.com:: Does it  even NEED to sport "GF"? ::Nope. Not these --Vital Farms! most definitely eggs & most definitely naturally gluten-free. No cross contact risk when it's a whole food in a shell. And these eggs taste like sunshine and cream, if such things can be tasted.  Add organic, sustainable, and cruelty-free to these golden yolks, and you have celiac-happy ... especially paired with huevos courtesy of Better Bean Co. below. (Put these on the changing  farming and food culture list too.)http://vitalfarms.com

Not in the least. Just rad. BETTER BEAN CO. is just better altogether. Better than beans? Nothing in my book. Well, mostly. I've never found beans that can stand-up to my recipe, until Better Bean Co They are local-sourced, un-canned frijoles are the only beans that can stand up to my traditional frijoles, and stand up like a boss. 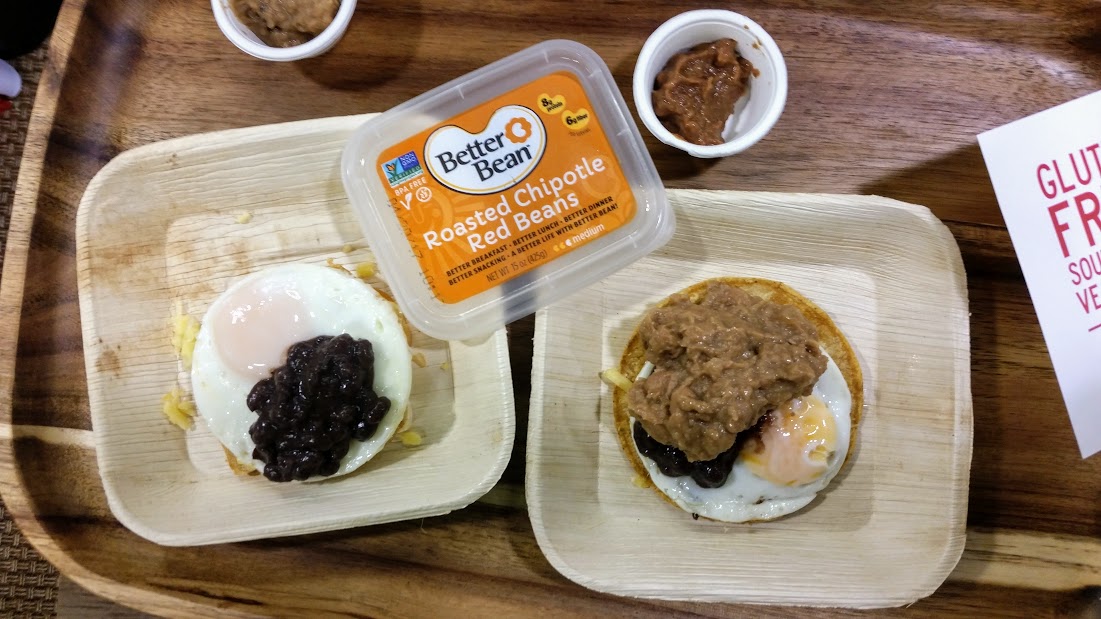 I would eat green eggs --er, pastured eggs and BEANS -- in a box, or with a fox.  I would eat these beans -- and eat them safely -- as a vegan, as a human, as a celiac -- and enjoy every bite. I know the owners and makers personally -- and their beans are locally-sourced; their facility is only beans, entirely gluten-free, and each batch is tested.http://betterbeanco.com

Probiotics, that is -- good bugs. Oh yes, Wild Brine: Fermentation that goes above and beyond. These krauts and kimchis aren't just wholly gluten-free, and test-verified, they're versatile, branched out into probiotic brine shots, and sauces that nourish the gut while they nourish the tastebuds. Wild Brine likewise wastes no resource: krauts, Sriracha sauces,  & probiotic shots all use product coming from the same fermentation process. 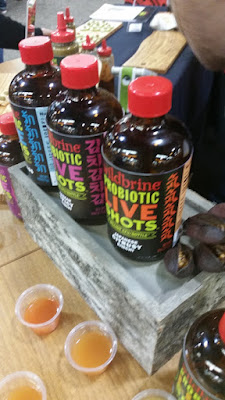 And the sriracha...! Variety is key to a gluten-free diet. Flavour in the form of spices & condiments can be key to variety - and Wilde Brine blows both out of the park.I'll testing the gut-balancing validity of the BUGS  through a 14 day Challenge to to see just what the stuff can do for a stressed digestive tract.
http://wildbrine.com:: Sports "GF"...and nothing else? Celiac-seriously? What is it? ::

Not ice. Nu Naturals. They were a surefire win at the first taste. Stevia-syrups, gluten-free: these aren't just celiac-serious, they're diabetic-support-serious. And if you have a kid (as I have clients) who need to replace an excess of sugar without losing their link to their sweet-tooth, a soda made of Ginger Syrup and soda water will keep them happy as clams. 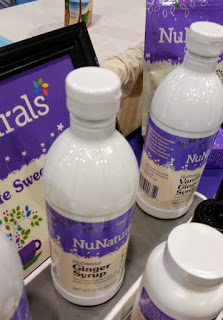 A little known fact:  diabetes and celiac like to go hand-in-hand, genetically and medically. I can eat sugar -- my grandmum is diabetic, and I'm not. But if I could only eat Nu Naturals drizzled over pancakes, dripped into fizzy water, or drizzled over coconut creme, I wouldn't feel deprived. That quality -- along with the naturally gluten-free aspect -- seals Nu's celiac-standout deal.


:: So it's "superfood" sporting "GF": celiac-serious or gluten-free fad on the superfood train? ::

Essentially, Essential Living Foods is the real deal. ELF has an integrated array of  wicked good good whole, naturally gluten-free superfoods/supplements, and  a mission to support poor and small-scale farmers in South America. Their ingredient sourcing is impeccable, both from a social & ecological standpoint, and the food-safety perspective. Ryan, who spoke with me in Anaheim, gave me a blow by blow of the process, from teaching organic farming processes (highly concentrated  indigenous pepper is used as a natural pesticide, and he showed me the photo on his phone of his visit to the site) to batch testing for allergens and quality. 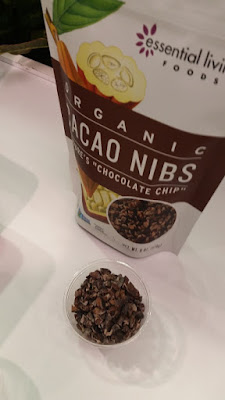 Back to the product:  I've never had a better handful of raw cacao nibs. No sweetening needed with these little blokes. Not to mention, they're prepared using a specific fermentation process that aids digestion, and brings out the full pop of the chocolate flavour profile.http://essentiallivingfoods.com 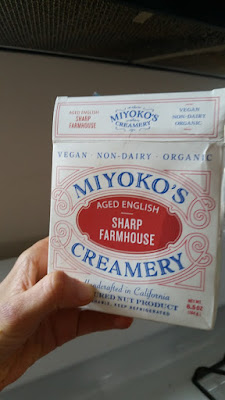 I have not had such wonderful cheese since I could  eat cow-cheese (which I can't post-celiac-diagnosis) -- but I don't see why a cheese must involve a cow if it can be this good involving  chickpeas and cashew, and whatever  magic Miyoko does in the manufacturing process.


(Miyoko's Kitchen is a gluten-free facility, vegan, and the deceptively simple recipe is organic).

Simply put: THIS CHEESE MADE MY MONTH. I miss cheese more than gluten, any time of day. Miyoko's spreadable, artisan-style cheeses truly miss nothing in their flavour and texture. I've been spreading the Herbs de Provence and Sharp Farmhouse Cheddar on Gluten Free Sourdough muffins all week, with a bit of berry jam.
http://miyokoskitchen.com:: What else is celiac-serious  & could stand to be gluten-free-month-making? ::

Organic India. Most definitely. O.I. makes tea of wonder. I love the flavour, the variety, the calming breath these teas impart.Perhaps part of it is the infusion of their mission and work in India. Organic India, I think, sets the bar for what  bCorp truly means (benefit corporation). I fell in love with their mission as fully as their tea. From aiding farmers to reclaim their land, or traditional farming practices; to supporting women who have been widowed, or are otherwise discriminated against in the often hostile-to-female-Indian-culture, to partnering with all and any of their producers on the basis of equality -- Organic India is as keenly soothing to a just world ecology as their teas are to a stressed adrenal system. 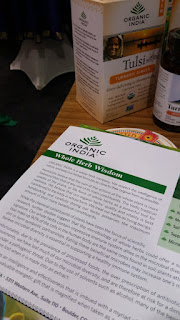 Organic India makes an array of holy basil, or "Tulsi" teas: the herb is nerve-soothing, adaptogenic, and a traditional family-grown green in India, where it's often seen on doorsteps in a pot. No wheat is processed in the O.I. facilities. As a B-Corporation, they are also fair-trade and organic certified, and support small-scale farmers, especially women.http://organicindia.comAnd then, ZEGO. 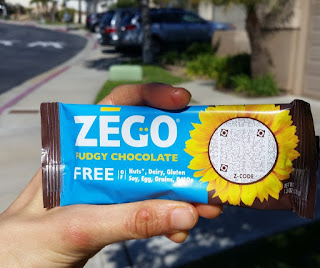 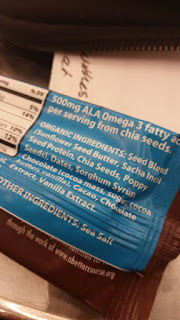 Free of? Zego is a pioneer.  The revolutionarily precise and conscientious testing means you can snap that QR code , and immediately get results on allergens. Gluten? Undetectable.Colleen, Zego's founder, is celiac. And she knows what it means to have quality, and safety, guaranteed. We chatted Friday night. She spent ages just tracking down all of her sources for ingredients, to make sure that what she puts in a Zego bar is free-from gluten at every stop of its journey to your mouth.So that is the celiac stand-out round up -- I'll be posting another round on supplements soon. But: If you saw something new, something that strikes your fancy, something you'd like to see soon -- drop me a comment!
What would you like to see on your market shelves?

The Stories Behind the Brands

"I Gave Up Martinis" & Other Mistakes an Allergic Foodie Admits