Not What You Think: Link Between Eating Disorders & Celiac

Tumbling Gluten Free
For Your Health For the way you live

What is the link between anorexia and celiac disease?  If you thought it was behavioural or genetic, you're probably not far off from a popular perception --but you're wrong.

The tie that binds the two diseases, both more deadly than most credit them for, is physiological / biological.

It's a simple equation of starvation = disease. In Celiac DIsease, the body begins to starve, regardless of actual weight. In anorexia, dysfunctional perception and behaviour is directly rooted in the body's physiological response to starvation. 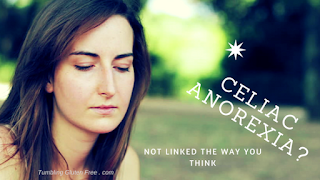 New and recently re-visited research in the medical community is illuminating the link, and both diseases, in an entirely new way.

What perpetuates both the distorted perception (including body dysmorphia) and disordered eating habits in anorexia,  is that state of malnutrition & low weight.

This recent research on the ties between the two diseases has piggybacked on studies that have clarified the physiological response that both triggers and perpetuates anorexia. Of course! Professionals are now saying - celiac is  comorbid (in other words, occurs simultaneously with) anorexia at a higher statistical rate.

Because starvation naturally leads the mentally and physically healthy man or women to develop the disease of anorexia nervosa; and treatment?

This newly understood link is key to treatment plans and strategies to treating both llnesses.  Because if weight triggers behaviour, the most important and primary area of treatment MUST be weight restoration.  The brain simply will not respond in a healthy way, and body and food perception will remain distorted, until weight is returned to a natural point.

So if you were feeling "oh-bloody-blinkers, here's another medical fact that will make it look like celiacs are nuts". Or if you were feeling that deep-rooted isolated sense of powerlessness and shame concerning an attitude towards food - go ahead and drop it.

The brain is physiologically linked - obviously - to the health of every other system in the body.  Malnutrition is killer. Seriously killer.

And what you can take away from the conclusions of recent studies is that it's just killer in a lot more ways than "if you don't get enough food, your heart stops".

Malnutrition, and untreated celiac, as well as untreated anorexia, are just medically and physically sneaky enough to tweak your head and behaviours into practical suicide. Yes, malnutrition can originate with an autoimmune disease that starves you by killing your gut's ability to absorb nutrition.

If that doesn't do it, the experience of starving can tweak your brain so much you refuse to recover and eat enough even after diagnosis.

Celiac and anorexia -- linked? Yes. For the reasons you thought?  Maybe not.

And ultimately, here's to a lot of hope in treating both diseases - because though it may take time and it may not be easy, restoring weight IS simple. It's a process: something that just needs work, one day at a time.

From there, the brain AND body begin to behave and THINK healthy again. From there, whether one suffers from one disease, or the other -- or both -- anyone can recover and live again.


If you're suffering from either disease, or worry about your weight, health, or have continuing issues with mineral and vitamin deficiencies, following up with a specialist in BOTH gastroenterology and behavioural issues is advised.

If you'd like to read a full explanation of the study I reviewed, involving healthy men who underwent voluntary starvation, you can find a good exploration of it here (The Effects of Starvation on Behavior: Implications for Dieting and Eating Disorders).

Why we do what we do

Why Should I Go Gluten Free Anyway?

What makes the current peanut allergy prevention study so much better than past studies?

What is freedible, anyway? (A video)