My Story, the Reason behind the Recipes and How I got My Life Back

Three years ago I weighed 376 lbs. I was on Weight Watchers for the millionth time and I was miserable. When I say miserable I think I need to explain just how miserable. My joints felt like they were on fire every second of the day, my skin was covered in a Eczema  from head to toe that burned and itched all the time, my lungs were heavy and weak and I broke out in coughing fits every time I laughed, hollered or so much as breathed too quickly. My stomach was in a constant state of upset and I was either constantly hungry or wouldn't eat for days at a time. I never slept. I tried, desperately but my body forced itself awake and I would lay there in agony night after night wondering why this was happening to me.

For the most part I kept what I thought was healthy foods in our home. I prepared dinner from scratch every night. We had a meat, starch and vegetable with each meal. We were doing okay weren't we? Turns out it wasn't okay for me at all. One night after a meal of pasta and bread I broke out in the worst rash I had ever had. From head to toe I was covered in sores that itched and burned and broke open and bled with the brush of a finger tip. I was having a severe asthma attack and I'll admit a panic attack.  My stomach hurt even worse than usual. I laid on the floor of the shower all night letting the water run over my broken body and crying. What was happening to me?
The next day the rash was still there along with incredible stomach and joint pain. I scoured the internet for hours. Searching every rash I could find. Comparing them with the one I was suffering from. Finally I found it. I clicked the link wearily. Dermatitis What?! What did I have? Some rare form of cancer? An infection? No, what I had was 90% of the markers of Celiac Disease and no insurance. I dove feet first into trying to heal myself. I was DONE feeling like this. I didn't care if all I ever ate again was lettuce and vinegar. I never wanted to feel like this again.
Upon going gluten free I focused on eating only naturally gluten free things. Fruits, veggies, meat and potatoes and rice. I also cut all dairy from my diet. I started feeling much better almost immediately. I wasn't however keeping the kitchen itself gluten free and that's when I got my lesson on cross contamination. After an over haul of the kitchen I realized I was going to have to learn a thing or two about developing recipes to keep my family from hating me for taking all the food away! I went to work with a hopeful heart and a budget that was no where near capable of handling gluten free convenience food prices. Which can be astronomically higher than those of their gluten containing counter partners. We were used to paying $2.50 for a loaf of bread and now we were seeing prices in the high $5 range. For the first year there just was no bread in our lives folks. I worked day and night, flop after flop figuring out how to make food we'd actually enjoy eating. My goodness were there some wonky ideas of bread substitutes!
On the plus side my weight fell off with great haste in fact, the whole family got a lot more healthy.  Here we are Christmas three years apart. 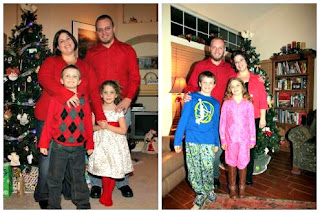 As great as I was feeling I was still having trouble with my stomach and lungs after eating certain things. I had been doing a ton of research by this point and learned that many people with Celiac or those that have a wheat intolerance tend to have other allergies as well. I knew I wasn't going to avoid the doc forever and wanted to be sure my self diagnosing wasn't just a quick fix to a bigger issue. I made an appointment and had an adult allergy test done because there was no way I was paying the deductible for the other tests they wanted to run. It came back with an allergy that surprised us all...
Corn. Apparently only about 3% of the population has an allergy to corn. Which is why we here in the U.S. use it in production of everything from toothpaste to seasonings and vitamins. There's even corn in a lot of bottled waters. Symptoms of a corn allergy can differ from person to person. I suffered from pretty much every last symptom on that page. I still often have a lot of those symptoms because, I'll admit I don't have it figured out 100% yet. What I do figure out I make a point to share with the world here on this site because there is so very little information out there yet on this rare allergy. I am finding more and more of us out there though and that brings me hope and makes me want to share more often.
My mission is to get the word out. To tell people to listen to their body. To pay attention to the foods they are eating and how they feel after them. Many of us struggle with one or more of these symptoms for years and always equate it to some random thing. What if it isn't? What are you putting in your body. Where did it come from? Ask yourself these questions. If you're struggling to feel normal every day you may have a food sensitivity. Let's work together to get the word out about food in-tolerances and allergies. Even if you don't suffer yourself maybe you know someone that does. Maybe my blog and blogs like mine will help you make them feel like part of the party even though they have to be careful what they eat. If I accomplish that for even one person I'll feel like this blog was worth every hour of love I put into it. Let me tell you, with the learning curve there is it's a lot of hours! ;) Thank you to everyone who comes and reads and supports this blog. Thank you for your support and I hope you enjoy the dishes.